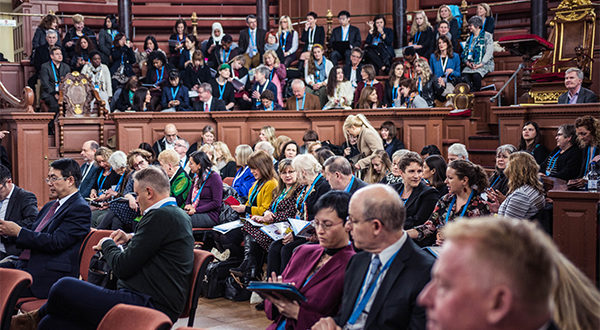 From 25th – 27th March, The World Literacy Summit was held in Oxford. The conference was attended by more than 200 literacy groups (NGO’s and Charities) from all over the world. More than 90 major paper speeches were given and as well as 300 delegates, 54 Ambassadors and High Commissioners attended from London.

The 2018 Summit was opened by Her Royal Highness Princess Laurentine of the Netherlands, who is the Chair of the European Union Council on Literacy. An important part of the ceremony was the presentation of the World Literacy Council Awards. And the Schweitzer Medal and Lectureship which is jointly presented by the World Literacy Council and Harris Manchester College Oxford University. The Awards were for:

The President of El Salvador Mr. Sanchez Cerenhas has decreed that 2018 be the year of literacy and to redouble their efforts to eradicate illiteracy by 2021. The Government has deployed 100,000 extra literacy specialists to reach 15,000 schools in 70 municipalities. The Committee was highly impressed by the nomination of El Salvador and feels this is an example for other countries in the future.

Annette Mpuga is from Campala Uganda. She has made a lifetime commitment to help improve literacy in her country. In her early years she was a volunteer for the Peace Core and concentrated on teaching and literacy in remote places in Africa. In recent years she has organised literacy councils and conferences and other literacy focussed initiatives across Uganda. Annette has made a major impact on her country with the community and Government organisations. She is Chairperson of the Uganda Reading Association and is a powerful advocate for literacy in Africa.

The winner for the 2018 Award is a group who started in Jordan providing childrens books and literacy support in places where there were no libraries (such as refugee camps). Their tagline is ‘a library in every neighbourhood’ over the past 8 years they have grown to have an impact on 32 countries and more than 55,000 children a year. We Love Reading is an organisation that has made a huge impact amongst some of the most underprivileged communities.

Melissa is the Founder and Executive Director of a literacy NGO called “Project Pearls”. The main mission of Project Pearls is to help children to get out of poverty and to enable them to achieve their dreams. In order to do this, Project Pearls provides education resources and classes and in particular scholarship grants. Melissa’s works mainly takes place in the Philipines but she has been expanding into other areas. Melissa is also holds a Master of Arts Degree and has written extensively on literacy. The Schweitzer Medal and Lectureship is jointly presented by the World Literacy Council and Harris Manchester College, Oxford University. At the next World Literacy Summit 2020, Melissa will provide a lecture at Harris Manchester College in the tradition of Albert Schweitzer who famously lectured there in 1929 and 1932. The Schweitzer lecture will be open to both attendees of the World Literacy Summit and students of Oxford University.

Delegates at the Opening Ceremony of the World Literacy Summit, Oxford.

Princess Laurentien of the Netherlands with Dr Tony Cree, Chair of the WLC at the Opening Ceremony.

Award winners at the Opening Ceremony.